Today I Am Carey

Voices of the Fall 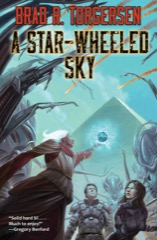 Today I Am Carey by Martin L. Shoemaker

Voices of the Fall by John Ringo and Gary Poole

The Collapsium by Wil McCarthy

Today I Am Carey

REMARKABLE DEBUT NOVEL FROM CRITICALLY ACCLAIMED AUTHOR MARTIN L. SHOEMAKER. Shoemaker proves why he has consistently been praised as one of the best story writers in SF today with this touching, thoughtful, action-packed debut novel, based on his award-winning short story "Today I am Paul."

Mildred has Alzheimer's. As memories fade, she acquires the aid of a full-time android to assist her in everyday life. Carey. Carey takes care of Mildred, but its true mission is to fill in the gaps in Mildred’s past. To bring yesterday into today by becoming a copy. But not merely a copy of a physical person. A copy from the inside out.

After Mildred passes, Carey must find a new purpose. For a time, that purpose is Mildred’s family. To keep them safe from harm. To be of service. There is Paul Owens, the overworked scientist and business leader. Susan Owens, the dedicated teacher. And Millie, a curious little girl who will grow up alongside her android best friend. And Carey will grow up with her. Carey cannot age. But Carey can change.

Carey struggles. Carey seeks to understand life’s challenges. Carey makes its own path. Carey must learn to live. To grow. To care. To survive. To be.

ORDER IN THE COURT! A new anthology of science fiction stories that explores what the future of jurisprudence might well be like, with thrilling, hilarious, and downright entertaining results! So much fun, it oughta be illegal! Stories by Robert A. Heinlein, Clifford D. Simak, Sarah A. Hoyt, and more.

Lawyers—pardon me, attorneys—may be portrayed in fiction as the good guys (and gals) or as greedy conniving shysters.

In mundane fiction, the former are represented ably by Earle Stanley Gardner’s Perry Mason and by Harper Lee’s Atticus Finch in To Kill a Mockingbird (we’ll pass over her other novel, Go Set a Watchman, with a less inspiring portrait—consider it obviously set in a parallel world). The less favorable view was expressed by Edgar Rice Burroughs in his SF classic, A Princess of Mars, in which his doubly immortal John Carter observes that the Martians are very fortunate in that, while they may behave with savage cruelty, and are constantly at war, at least they have no lawyers.

Both views of the legal profession have been explored in science fiction and fantasy since John Carter set foot on the Red Planet, as well as looking into possible ways that future punishment for crimes may change, not necessarily for the better. Some of science fiction’s greatest talents are included in this book, including classics by Robert A. Heinlein, Larry Niven, Clifford D. Simak, Robert Silverberg, and more, and newer stories by Sarah A. Hoyt, Alex Shvartsman, and Alvaro Zinos-Amaros, and still other stellar talents bringing down the judge’s gavel with a verdict of excellent entertainment.

Well over a millennia in the past, men and women fled Earth. Escaping Armageddon. What they found—lost in some forgotten corner of the Milky Way Galaxy—was the Waywork: an alien superhighway system between a closed sphere of stars. Now, the five Starstates—which rule all that’s left of humanity—are poised on the brink of another terrible war. And three unlikely people—the daring daughter of a royal family, the reluctant son of an interstellar shipping magnate, and a disgraced flag officer seeking redemption—must come together to race against the forces of their greatest foe. Because the Waywork may at last be ready to give up its secrets, and one woman—a merciless autocrat, from the Waywork’s most brutal regime—is determined to ensure that she controls it all. It’s a clash of civilizations, as the future of the human race hangs in the balance!

Voices of the Fall

Civilization had fallen. Everyone who survived the plague lived through the Fall, that terrible autumn when life as they had known it ended in blood and chaos.

Nuclear attack submarines facing sudden and unimaginable crises. Paid hunters on a remote island suddenly cut off from any hope of support. Elite assassins. Never-made-it retirees. Bong-toting former soldiers. There were seven and a half billion stories of pain and suffering, courage, hope and struggle crying out from history: Remember us.

As black code continues to eat away at Natch's sanity, he faces a mutiny from his own apprentices, a legal onslaught from the government, and the return of enemies old and new. In desperation, the entrepreneur turns to some unlikely allies: a radical politician with an agenda of his own, and a childhood enemy to whom he has done a terrible wrong.

Natch's struggle will take him from the halls of power in Melbourne to the ruined cities of the diss. Hanging in the balance is the fate of MultiReal, a technology that could end the tyranny of the Council forever—or give the Council the ultimate weapon of oppression.

“INFOQUAKE should appeal to just about any SF reader, but if you like Herbert’s Dune or any of Stross’ work, you should really enjoy this book.” —SF Signal

Praise for MultiReal:
“Edelman brings fresh air to the technological thriller. . . . MultiReal itself is firmly established as one of the most fascinating singularity technologies in years.” —Publishers Weekly

“Once you realize that Natch is less Neo than he is Steve Jobs, you’re in for a swell ride.” —Sci-Fi Weekly

Praise for Geosynchron:
“This smart, idiosyncratic blend of cyberpunk, libertarian entrepreneurship, and social engineering will, I think, stand as a seminal work of 21st century SF.” —Locus

“Takes the series one level higher, beyond mundanity to true sense-of-wonder SF, so it finally plays on the level of the masters of modern SF.” —Fantasy Book Critic

In the eighth decade of the Queendom of Sol, three commodities rule the day. The first is wellstone, a form of programmable matter capable of emulating almost any substance: natural, artificial, even hypothetical. The second is collapsium, a deadly crystal composed of miniature black holes, vital for the transmission of information and matter—including humans—throughout the solar system. The third is the bitter rivalry between Her Majesty's top scientists.

Bruno de Towaji, famed lover and statesman, dreams of building an arc de fin, an almost mythical device capable of probing the farthest reaches of spacetime. Marlon Sykes, de Towaji's rival in both love and science, is meanwhile hard at work on a vast telecommunications project whose first step is the construction of a ring of collapsium around the sun. But when a ruthless saboteur attacks the Ring Collapsiter and sends it falling into the sun, the two scientists must put aside personal animosity and combine their prodigious intellects to prevent the destruction of the solar system . . . and every living thing within it.

Avalon was thriving. The cold sleep colonists from Earth had settled on a verdant, livable world. The fast and cunning predators humans named "grendels" were under control, and the mainland outposts well established. Avalon's new mainland hydroelectric power station was nearly complete, and when on-line would compensate for the nuclear power systems lost in the Grendel Wars. Humans would have power, and with power came the ability to make all the necessities for life. They would survive.

They would not survive as a spacefaring people.

What they were losing faster than they knew was the ability to get to space. But unbeknownst to the planet-bound humans, something was moving out there in the stars, decelerating at a rate impossible for a natural object. And its destination was Avalon. The most probable origin was Earth's Solar System.

This is a novel of first contact—between the human Starborn and the self-named Godsons who followed on, between the first generation of Avalon born humans and their descendants, and between humans and the almost ineffably alien species native to their new world. . . .

Today I Am Carey by Martin L. Shoemaker

Voices of the Fall by John Ringo and Gary Poole

The Collapsium by Wil McCarthy