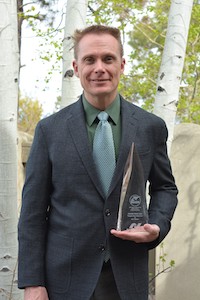 RIVERDALE, NEW YORK, March 22, 2020—M.T. Reiten of Los Alamos, New Mexico, has won the grand prize in the 2020 Jim Baen Memorial Award competition for his short story " “Bagala Devi Objective.” The Jim Baen Memorial Short Story Contest has been held annually since 2007 and is focused on stories of space exploration and discovery, with an optimistic spin on those activities for the human race. First runner up in this year's contest is “Spinners,” by Kate MacEachern. There was a tie for second runner up between “Sample Return,” by C. Stuart Hardwick and “The Caretaker,” by Tiffany Smith.

Judges for the award were celebrity judge David Drake, and the editors of Baen Books. Stories were judged anonymously. The Jim Baen Memorial Award will be presented May 29, 2020, in a ceremony at the annual International Space Development Conference held this year in Dallas, Texas. The winner receives a distinctive award and professional publication of the story in June 2020 at the Baen.com web site.

“The National Space Society and Baen Books applaud the role that science fiction plays in advancing real science and have teamed up to sponsor this short fiction contest in memory of Jim Baen, the founder of Baen Books,” said William Ledbetter, contest administrator. “It's a wonderful opportunity for the winner to meet scientists and space advocates from around the world.”

The contest occurs annually and looks for stories that demonstrate the positive aspects of space exploration and discovery. Over the years, the contest has developed an international character. In addition to the United States, entrants have hailed from Sweden, the United Kingdom, Australia, Canada, Algeria, Spain, and Morocco.