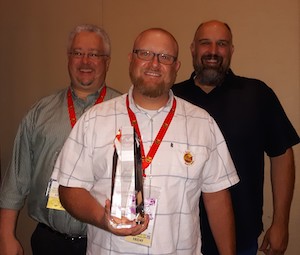 Riverdale, New York, July 2019—Baen Books announces “Treason Properly” by J. J. Cragun as the grand prize winner of the 2019 Baen Fantasy Adventure Award for best original fantasy short story. Second place was awarded to “In the House of Rain and Gale” by Joelle Douthit. The third place winner was “In the City of Dreadful Joy” by Misha Burnett. The winners, chosen from among the top ten finalists announced last month, were selected by Baen editorial staff.

Started in 2014, this is the sixth annual Baen Fantasy Adventure Award. Baen presents this award to honor stories that best exemplify the spirit of adventure, imagination, and great storytelling in a work of short fiction containing an element of the fantastic, whether epic fantasy, heroic fantasy, sword and sorcery, or contemporary fantasy. The awards were presented by best-selling Baen author Larry Correia on July 6th at SpikeCon, which was home to this year’s Westercon, NASFic, 1632 Minicon and Manticon. While the stories are judged anonymously--and stories were submitted by authors from all around the globe--as fate would have it, the Grand Prize Winner, J.J. Cragun resides in Morgan, Utah, which neighbors SpikeCon’s host city of Layton, Utah.

On hand to emcee the Baen festivities, Baen Executive Editor Jim Minz said, “Fantasy has inspired and entertained humanity since before the written word, and our earliest known sagas are filled with rousing adventures and fantastical creatures. We’re honored to continue that tradition.”

The winner receives an award trophy, a prize box filled with Baen merchandise, and paid professional rates for first publication rights. “Treason Properly” by J.J. Cragun will be featured on Baen.com main webpage starting July 15th, 2019 until August 15th, 2019, and will be available at the Baen Free Library after that.