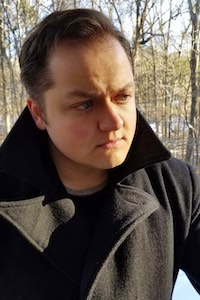 RIVERDALE, NEW YORK, January 16, 2023—Baen Books has signed a contract with author Christopher Ruocchio to publish the final two books in his internationally award-winning Sun Eater series, as well as for a first look deal for Ruocchio’s next series.

The series is an epic space opera set in the far future following melancholy protagonist Hadrian Marlowe, whose path will see him rise to become humanity’s greatest hero, before becoming it’s most infamous monster. Starting with the first book, Empire of Silence, in 2018, the Sun Eater series has earned a devoted fan following for its vivid writing style, vast and interesting intergalactic conflict, and Marlowe as both a protagonist and unreliable narrator. The series has also earned Ruocchio the Manly Wade Wellman Award, the Hellfest Literary Prize, and multiple Dragon Award nominations.

Though the first five books were published by DAW, with the publisher’s acquisition by Astra Publishing House bringing signifigant changes to the company, Ruocchio began to look for a new publisher for the remainder of the series, before reaching a deal with Baen Books.

“I’m thrilled to be coming home to Baen,” said Ruocchio. “It was at Baen that I got my start in the publishing industry, both with my short story “Not Made For Us,” which was the first thing I ever published—and as a lowly intern way back in AD 2015.”

Ruocchio was already no stranger to Baen fans and readers, having edited and contributed several Sun Eater stories to multiple Baen anthologies, most recently with December 2022’s Worlds Long Lost.

For her part, Baen Publisher Toni Weisskopf expressed excitement to bring the Sun Eater series to Baen, as well as to add Ruocchio to its list of authors.

“I'm very excited to be publishing these novels,” Weisskopf said. “I think readers, too, will enjoy the depth and breadth of this epic series, reminiscent of the best of both Frank Herbert and Gene Wolfe.”

Weisskopf is far from alone in her praise for Ruocchio as an author either, as he and the Sun Eater series have earned praise from authors like James S.A. Corey, Eric Flint, Kevin J. Anderson and David Drake, and Analog SF&F has hailed the series as “one of the best works of epic space opera today.”

Longtime Sun Eater fans can also rest easy over any fears a new publisher may bring dramatic changes—Baen plans to retain cover artist Kieran Yanner, who had produced the covers for all the preceding novels, and the only planned design change to the series will be the Baen logo on the spine. Ruocchio himself is excited about getting to deliver the finale he has long envisioned for the Sun Eater series, and over some of the possibilities working with Baen in the future allows.

“The series is getting the ending it deserves. These last two books will allow Hadrian’s endgame the time and space it needs to unfold,” Ruocchio said. “Sun Eater was envisioned as five books originally, but the tale’s grown in the telling, and this final act will pit our hero against an evil simply too big to be contained.”

The first Sun Eater book to be published by Baen Books will be released in hardcover in spring 2024, under the working title Disquiet Gods. Ruocchio is represented by Shawna McCarthy of McCarthy Literary Agency, and Danny Baror of Baror International. 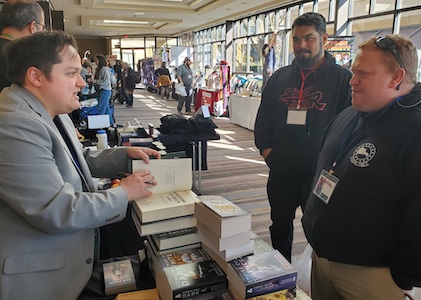