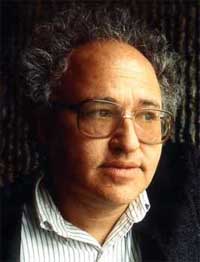 Harald, a new fantasy novel by David D. Friedman, is a first novel but far from a first book. The author's previous works--on political theory, economics and law--have been translated into half a dozen languages and reviewed in the Times Literary Supplement, the Wall Street Journal, and the New York Times, as well as academic publications in his fields.

David Friedman is not exactly your average law professor, either. His web page, which averages 3500 visitors a day, includes not only the virtual footnotes to his widely praised Law's Order and the web pages for the courses he teaches at Santa Clara University but also a complete price theory textbook, hundreds of worked out recipes from medieval cookbooks, a verse account of the deeds of William Marshall--a prominent 12th century knight, copies of published articles on the legal systems of saga period Iceland and 18th century England, and a great deal more. And how many university professors can honestly claim to have never taken a course for credit in either of the fields they teach in or to have a doctorate in theoretical physics? Friedman can.

David also comes from a well published family; his father is Nobel Laureate economist and libertarian author Milton Friedman. All of this has gone into the making of his first novel.

Friedman reports: "I have been writing nonfiction for a long time--my first book was published more than thirty years ago and is still in print. The writing of Harald  came out of my experience as a storyteller--I run a bardic circle at Pennsic [the yearly gathering of the Society for Creative Anachronism] and spend a good deal of every evening telling stories from medieval sources. I also used to make up stories for my children when putting them to bed. The first draft of Harald was composed in my head as a way of helping me fall asleep, then told to my daughter as a story, and then written."

For influences, Friedman names an interesting assortment: "There are a fair number of authors I greatly admire, starting with Tolkien, but insofar as there a specifically literary influence on how I write it is probably the Icelandic sagas. I am not writing in saga style but in a style influenced by it. One other influence on Harald is C.J. Cherryh's The Paladin, of which I am very fond."

Friedman is also very fond of the characters he has created. "Other than my protagonist, my favorite is probably Anne, my stealth heroine. In the original plot she was a minor character, the King's mistress whom Harald used to influence opinion within the King's set. In the finished version she starts as the noblewoman whom the King is courting, ends as his queen, exhibits a degree of resourcefulness comparable to that of my protagonist and is one of the main reasons why things work out successfully.

"Harald's comment on her is: 'Beautiful. Brave. More sense than most. Better than James [the King] deserves--anyone else I can think of.'

"I'm also fond of Harald's grandson Asbjorn, of Leonora, of Elaina and Kara, of Hen, of ...  " Hmm, perhaps we'd better stop now before the entire book gets retold!

Some of Friedman's favorite writers outside of science fiction and fantasy include: "Kipling--although he did write at least two science fiction stories. Dorothy Sayers. Rex Stout. G.K. Chesterton. Giacomo Casanova. Lots of others."

I wondered how the Society for Creative Anachronism had influenced the development of the book. "The original seed for my plot came out of some events I was a part of in the SCA a very long time ago, although by the time the book was written it had changed almost beyond recognition. One of the characters is in part based on an SCA friend. Various of the technical details, having to do with food, archery, hardened leather armor, and the like come out of things I learned as a result of my SCA involvement.

"But the biggest influence is my experience as an oral storyteller in the SCA."

In his day job, Friedman is a widely published economist of libertarian bent. Inevitably, that has also influenced his story. "My protagonist's society is loosely based on saga period Iceland, a society I have published on. Some of the underlying ideas of the book come out of my general views on matters of economics and politics, broadly defined. I had a good deal of fun with the economic problem my protagonist faces in raising an army from a semi-stateless society--no draft, no feudal obligations, no taxes."

For more information go to:  http://www.daviddfriedman.com

For more information on Harald, go to: http://www.daviddfriedman.com/harald/Harald.html