Can You Make the Dean’s List?
Take This Heinlein Quiz and Find Out 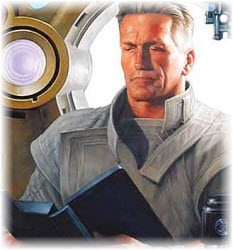 Hail, Robert A. Heinlein, and long live the Dean of Science Fiction! Think you know your stuff when it comes to RAH? Well, prove it, space cadet!

To celebrate the release of a new paperback edition of Farnham’s Freehold complete with an all new celebrity foreword by Heinlein biographer Bill Patterson, here’s a quiz to put you through the paces and test your Heinleinian mettle. Beware: no namby-pamby softballs here; this Heinlein quiz is a harsh mistress. TANSTAAFL!

[Note: we’re pretty sure that there are at least a couple of questions here that you CANNOT find answers for on the internet. If you survive this quiz, then facing down a Bug invasion should be a piece of cake. Get the answers and find your RAH rating at the end.]

1. Why did Heinlein retire from the Navy?

B. He lost a portion of his left leg in a friendly fire accident

D. Heinlein was never in the Navy. He served in the Army during WW II.

2. RAH considered this writer his overall favorite and actively collected this writer’s works, including obscure tracts.

B. A battle tank of enormous proportions

D. None. This is Heinlein’s only novel set in the present.

4. In Farmer in the Sky, it makes a big difference in the story that William Lermer is:

A. A girl disguised as a boy

B. A former member of the Astrogator’s Guild

D. Illiterate, but possessed of a photographic memory

5. What science fiction writer said this about RAH?

“Several years ago, when I was ill, Heinlein offered his help, anything he could do, and we had never met; he would phone me to cheer me up and see how I was doing. He wanted to buy me an electric typewriter, God bless him—one of the few true gentlemen in this world. He knows I'm a flipped-out freak and still he helped me and my wife when we were in trouble. That is the best in humanity, there; that is who and what I love."

6. In Have Space Suit—Will Travel:

A. Young Thorby inherits a space suit from his beggar father, who is really a spy in deep cover.

B. Young John Lyle revolts against his job as a palace security guard for the sake of love and then wanders the

spaceways after being rejected.

C. Old Mary Sperling must decide between immortality and love.

7. To whom is science fiction writer and critic Damon Knight referring in this passage?

“She is a chemist, biochemist, aviation test engineer, experimental horticulturalist; she earned varsity letters at N.Y.U. in swimming, diving, basketball and field hockey, and became a competitive figure skater after graduation; she speaks seven languages so far, and is starting on an eighth.”

A. Friday in Friday

C. PeeWee in Have Spacesuit—Will Travel

D. Alice Dalgleish, the editor of the RAH juveniles

E. Jill Boardman in Stranger in a Strange Land

B. To fully understand in a complete and total manner

D. To achieve citizenship by serving in the military

9. “Democracy is a poor system of government at best; the only thing that can honestly be said in its favor is that it is about eight times as good as any other method the human race has ever tried.”

One of RAH’s most famous statements on democracy, this was actually spoken by one of his characters. Which one?

A. Jubal Harshaw in Stranger in a Strange Land

B. Johnie Rico in Starship Troopers

E. No, it was Heinlein himself who said it in Take Back Your Government

10. Contrary to popular legend, Heinlein NEVER made an acronym of the phrase “There Ain’t No Such Thing as a Free Lunch,” transforming it to “TANSTAAFL” in The Moon is a Harsh Mistress.

11. How many Heinlein juveniles were published by Scribner’s?

13. In “The Green Hills of Earth,” all of the following is true of space bard Rhysling EXCEPT:

A. He is the creator of a famous anthem of the space ways

B. He is blind

C. His famous song also shows up in Farmer in the Sky

D. He began his career as a jetman

F. His songs were usually ribald and scurrilous

15. On what planet is “The Menace from Earth” set?

A. Earth, of course

B. Pluto, when it was generally considered a planet

C. Not on a planet; on Earth’s moon

16. Which novel is usually considered the final story in internal, story chronology of Heinlein’s Future History?

A. To Sail Beyond the Sunset

D. Stranger in a Strange Land

A. Disowns him for joining the military

B. Is killed in the Bug attack on Buenos Aires

C. Later joins the army—and Rico meets her in combat

D. Is taken to Klendathu, a human slave of the Bugs

18. In The Moon is a Harsh Mistress the Loonies finally secede from Earth using

A. A time machine that alters the past

B. A rail gun that throws rocks down the gravity well

C. The Loonies don’t defeat Earth militarily; they argue it into submission!

D. A suicide-bomb nuclear explosion that also destroys the Moon and all upon it

19. In which RAH book is Mother Thing a main character?

A. The Star Beast

B. Citizen of the Galaxy

D. The Number of the Beast

20. "He is not only America's premier writer of speculative fiction, but the greatest writer of such fiction in the world.”

Who said this about RAH?

which was created by Larry Niven.

11. C; the 13th, Starship Troopers, was rejected by Scribner’s and picked up by Putnam 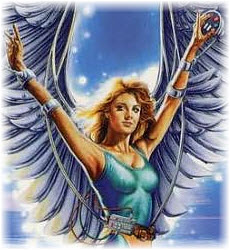 PLUS: If you missed 3, 4, 6, 13 and 19 but got 8, 9, 10, 14 17 and 18, you have a world of Heinlein awaiting you! May we suggest you check out the First Heinlein Golden Age including such classics as Starman Jones, Citizen of the Galaxy, Revolt in 2100, Farmer in the Sky, Farnham’s Freehold, The Star Beast and early RAH masterpiece, Have Space Suit—Will Travel