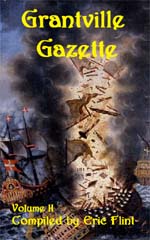 The new United States in central Germany launches a one-plane Doolittle Raid on Paris, France. The target: their arch-enemy, Cardinal Richelieu. Meanwhile, an ambassador from the Mughal Empire of northern India is being held captive in Austria by the Habsburg dynasty. Mike Stearns decides to send a mercenary company to rescue him, led by two seventeenth-century mercenary officers: an Englishman and a Irishman, who seem to spend as much time fighting each other as they do the enemy.

Mike Spehar's "Collateral Damage" and Chris Weber's "The Company Men" are just two of the stories contained in this second volume of the Grantville Gazette. In other stories:

— a prominent Italian musician decides to travel to Grantville to investigate the music of the future;

— an American archer and a Finnish cavalryman become friends in the middle of a battlefield;

— a Lutheran pastor begins a theological challenge to the establishment based on his interpretation of the Ring of Fire;

— American and German detectives become partners to investigate a murder;

— and, in the first part of Danita Ewing's serialized short novel, An Invisible War, the new United States founds a medical school in Jena despite resistance from up-timers and down-timers alike.

The second volume of Grantville Gazette also contains factual articles which explain some of the technical background for the 1632 series, including articles on practical geology, telecommunications, and seventeenth-century swordsmanship.

In Virginia DeMarce's witty and touching "Pastor Kastenmayers Revenge", a Lutheran pastor gets even with the American who eloped with his daughter by scheming to gain new adherents through eight separate arranged marriages between Lutheran down-timers and American up-timers.

The same teenagers who launched the sewing machine industry in Volume 1 move on to conquer the financial world, in Gorg Huffs "Other Peoples Money";

Francis Turners "Hobsons Choice" tells the tale of the personal and theological impact of the Ring of Fire on rambunctious students and barmaids in the university town of Cambridge, England;

in Eva Muschs "If the Demons Will Sleep", a woman terrorized by the notorious Hungarian countess Bartholdy finds peace and sanctuary in Grantville;

and Danita Ewing concludes the short novel An Invisible War, which began in Volume 2.

The third volume of the Gazette also contain factual articles exploring such topics as the centrality of iron to the industrial revolution, the prospects for the mechanization of agriculture in the 17th century, and the logic behind the adoption of the Struve-Reardon Gun as the basic weapon of the USEs infantry.

In Paula Goodlett and Gorg Huff's "Poor Little Rich Girls," we follow the continuing adventures of the teenage tycoons begun by Huff in "The Sewing Circle" (Gazette #1) and "Other People's Money" (Gazette #3). The focus in this story, however, is on the younger siblings—the so-called Barbie Consortium—and their down-timer associates and enemies.

Jose Clavell's "Magdeburg Marines" and Ernest Lutz and John Zeek's "Elizabeth" depict the early days of two military units after the Ring of Fire: a reborn U.S. Marine Corps trying to adapt to new circumstances, and the First Railway Company, formed to provide logistics using a combination of up-time and down-time methods and technology.

David Carrico's "Heavy Metal Music" continues the story of the interaction between up-time and down-time musicians that he began in last issue's "The Sound of Music."

—A German craftsman blackballed by guild masters gets a new start in Karen Bergstralh's "One Man's Junk."

—Grantville has to deal with the tragic accidental deaths of several high school graduates in Kerryn Offord's "The Class of '34."

—In Virginia DeMarce's "'Til We Meet Again," a widowed up-timer responds to her husband's death by joining the faculty in the newly-established women's college in Quedlinburg.

The fourth volume of the Gazette also contains factual articles dealing with the development of an oil industry, advances in textile and garment manufacture, possible uses of biodiesel technology, and differing views on the prospects of creating a machine gun using the resources and technology available after the Ring of Fire.