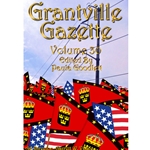 It's that time again! Time to check out just what's going on in Eric Flint's 1632 Universe!

The law is . . . many things to many people. Samuel Krapp thinks some of them are perverse. Ouch. Read why in Virginia DeMarce's "Speaking of Uncle Abner." And who would think that plain old measles is a problem? Most of Grantville is about to find out why. Read about it in "The Red Menace: Latency" by Gus Kritikos and Kerryn Offord. Plain old measles? 'Fraid not.

Jose Clavell is back with his navy cops in "NCIS: No Greater Love." Find out who has the greater love. Terry Howard and James Copley quote the Devil in "Yes, Dear." Mind, it's the Devil in Damned Yankees, so he's an entertaining fellow.

Our serials continue with Herbert and William Sakalauck's in "Northwest Passage, Part 4," where the French start getting involved. Karen and Kevin Evan are headed east with "No Ship for Tranquebar, Part Three." And we've got plastics galore—or information about them—in Iver P. Cooper's "Industrial Alchemy, Part 5: Polymers." Back to the measles in Gus Kritikos' "Common Childhood Diseases in the 1630s, Part 1, Fevers with Rashes."

Grantville Gazette, Volume 29 is ready! Are you?

Sample
Better late than never, as they say! Grantville Gazette Volume 30 has at last arrived!

Our new department, the Universe Annex, makes it's debut this issue. We have columns and a science fiction or fantasy story that aren't related to the 1632 universe. All very interesting and R. J. Ortega's "Summerland Rentals" is a fantasy you don't want to miss.

Back in 1632, see Virginia DeMarce's "Nor the Moon by Night" and "Historically Well Preserved." Different places and different people, all interesting. Kerryn Offord gives us "The Boat," the story of just what happened about that expensive boat that got wrecked . . . by the government. Blaise Pascal is at it again in Tim Roesch's "Blaise Pascal and the Adders of Apraphul."

Terry Howard writes about Rev. Al Green and what happens to him in "A Tale of Two Alberts," while Bradley H. Sinor and Tracy S. Morris bring back their bubbly reporter in "A Study in Redheads." Harry Lefferts is up to his usual antics in David Carrico's "Hair of the Dog." European immigration to the new world is tackled in Herbert and William Sakalaucks' "Northwest Passage, Part 5" while Kevin and Karen Evans bring us the last part of their India trip story, "No Ship for Tranquebar, Part Fours."

Nonfiction this issue has Rick Boatright's "The Aqualator" and you're just not going to believe the direction of computer science in this universe! Not to mention, there's no telling what's going to happen with ships in this alternate future. Read Iver P. Cooper's "The Multihull and the Mariner."

We finish off with two new columns, one from Bud Webster from his Past Masters series and one from Kristine Kathryn Rusch.

Great reading, loads of info! What more could you ask for?

Lots of differences, don't you think? There's the breakdown of social barriers, as portrayed in James Copley's "Margarete's Rose." Technology makes its mark in Jack Carroll's "Storm Signals." Something as simple as an April Fool joke causes a bit of, er, irritation on the part of one man in Iver P. Cooper's "Lion's Tower," not to mention the changes brought about by the railroads, which you can read about in Iver's "Stitching the Country Together."

Henneberg experiences a wrenching change in Virginia DeMarce's "The Red Flage of Henneberg." Swiss Army knives? Maybe not so much. See Kim Schoeffel's "Me Fecit Solingen Nicht" for what could happen there. Papermaking has lots of potential for improvement, as in Terry Howard's "The Future Is Where You Started."

And not all the things the up-timer's bring are good things. Check out what's happening to the grapes and wine-making industry in Kerryn Offord's "Rotkäppchen." Music we know will be affected, and Enrico Toro and David Carrico demonstrate that in "Euterpe, Episode 4." Herb Sakalaucks is back with the next episode of what might be going on in the New World in "Northwest Passage, Part Six."

Now, back in our own timeline, what might go on in space sometime in the future? Check out Jason K. Chapman's "The Long Fall" for one take on that.

Grantville Gazette 31. Ready for you now.