From Smart Flesh to Custom Organs:
The Growing Science of Tissue Engineering.


One of the biggest challenges to developing the next generation of bionics and brain-controlled prosthetics is getting electrical sensors onto the relevant parts of the brain without damaging it. Many of the electrodes used to record from the brain are rigid wires sometimes known as daggers, such as the ceramic electrodes (Figure 1) used for the recent report of a memory prosthetic [1].

The problem with these rigid structures is that they don't conform to the tissue they are supposed to record. The surface of the brain is folded. Structures within the brain are complicated three-dimensional shapes with folds, bends, ridges, troughs and curves. One solution is to make electrodes flexible like the ones shown in Figure 2. This electrode is patterned onto thin plastic so that it flexes where the brain flexes, and molds itself (mostly) to the surface of the brain. The problem is that the material used to make the flexible electrode is still pretty thick and stiff compared to brain tissue. It doesn't quite conform to the surface of the brain. It also doesn't move when the tissue moves. Mostly, we don't want it to. The wires that connect the recording sites can still be pretty fragile, and they might break if the material flexes too much or moves around too much. 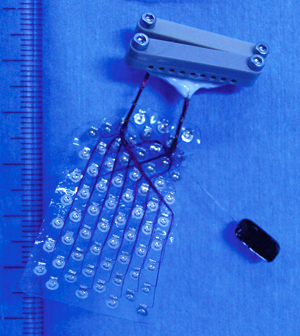 So, how are we going to make electrical recording surfaces that can truly mold to the tissue it records from? We need something flexible, yet durable - and something we can make in any shape or size. Enter Smart Flesh the flexible printed circuit made from silk that adheres and flexes with skin, muscle or brain. This remarkable development comes from the laboratory of Dr. John Rogers at the University of Illinois. It is hard to say exactly which capability Dr. Rogers first sought –- flexibility, conforming to the folds and wrinkles of the skin, brain (Figure 3) or any three-dimensional surface – or stretchability, the ability to expand and contract with the aforementioned skin, brain or any moving surface. However he set about developing these properties, the possibilities for novel electronics and sensing systems are exciting. 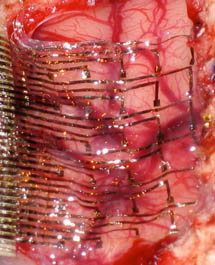 Figure 3: Illustration of a Smart Flesh electrode that conforms to the surface of the brain.
Photo by the Rogers Research Group (Dr. John A. Rogers) at the University of Illinois, and featured on the cover of Science News.

Why are flexible circuits so important, though, and how did we get here from the rigid circuit boards that are familiar from the computer electronics revolution of the last century? Prior to the 1950s, electronic circuits were discrete in that each transistor, each tube, each switch was physically connected to the rest of the electronic systems by wire. A recent visit to the Computer History Museum in Mountain View yielded a fascinating look at what must seem ancient history unless you actually grew up as part of the computer industry in the latter half of the Twentieth Century. The earliest computational devices (such as Babbage's Difference Engine) used gears, cogs and clockwork – but the electrical and electronic computers of the 1950's used tubes, switches and miles of wire. The first computer that I ever used on a regular basis was a Digital Equipment Corporation PDP-11. (I absolutely loved the fact that my favorite SF author of the time –- James P. Hogan – worked for D.E.C. and included them in his books.) This computer was built in the 1970's and predated the use of motherboards common to modern PCs – but the main backplane which connected all of the processing components was a steel post and copper wire construction. The backplane was a rigid piece of fiberglass with hundreds of posts. Each post was wrapped with the non-insulated end of a copper wire, with the opposite of that wire wrapped around another post on a separate part of the backplane. Sockets on the backplane allowed one to plug in primitive circuit boards, which were the first attempt at putting patterns of fine copper, gold, and silver films onto flat boards to create circuits that did not require wires. In 1958, Jack Kilby, at Texas Instruments company outside Dallas, TX, developed a method for making all of the circuits needed for an electronic device out of the same block of material—in this case, silicon. This "integrated circuit" would be refined and miniaturized to result in the computer chips that we take for granted.

Meanwhile, in the field of neuroscience, researchers were limited to putting rather large single wires (approximately 1/4 millimeter diameter) into the brain to record from individual neurons or brain cells. Even though the technology advanced to the point of using multiples of very fine wires (1/100 of a millimeter in diameter), it still did not fulfill the need to precisely position each wires to record specific networks and circuits within the brain. It was not until Dr. Greg Gerhardt and Dr. Karen Moxon at the University of Colorado Health Science Center developed a technique for applying integrated circuit techniques to sub-millimeter thick aluminum oxide ceramic, that neuroscientists had reliable circuit-like electrodes (Figure 1) that could be placed deep in the brain and still record precise locations within that brain. However, those electrode were still fairly rigid, and did not conform to the structure – meaning that the neurons to be recorded had to conform themselves to the electrode, rather than the electrode conforming to the neurons.

The rise of consumer electronic devices from the 1980s to the present brought many developments in circuit technology. A new flexible circuit first showed up in 35mm film cameras that incorporated electronic shutter control and metering. The need to fold the electronics into the camera body required a sturdy, yet flexible wiring, and flex circuits perfectly fit that purpose. The earliest flex circuits etched flat connectors onto DuPont's Kapton film (developed for the Apollo Program) and electronics developers found numerous ways to incorporate the flexible electronics into their devices. Neuroscientists also briefly considered flex circuits for our recording electrodes, but found that the material was not very durable in the warm and wet conditions of the human body (and brain!).

This is why Smart Flesh is such a boon to physiology and electronics. A quick review of Dr. Rogers' website shows many different applications of polymers, biology and electronics. One application of Smart Flesh is circuits built onto a surface of silk which can be placed on the skin, or inside the body and retain its shape while remaining flexible. Another application is dissolving circuits based on polymers that will survive hours to weeks, but dissolve like surgical stitches once they are not longer needed. A key feature of all of many of the Rogers Lab developments is the ability for the electronic components to bend and stretch. Figure 4 shows how the "wiring" of smart flesh is looped and folded in three dimensions, and is not flat as in printed circuits or integrated circuits. The combination of folds and flexible electrically conductive silicon and carbon nanotubes ensures that the embedded wiring of the circuit will not break or separate as the surface is bent, rolled or shaped. 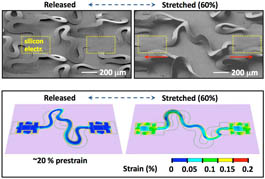 Once it is common to print circuits on flexible material and apply them to skin or brain, it is a short step to making the circuits that can be applied directly to tissue. One way might be to construct the circuits with a peel away or dissolvable backing, so that the circuit could be placed on skin, or on an internal organ such as the heart, and only the electronics left in place. Another technique could certainly evolve from 3-D printing and fabrication technology using conductive inks and nanotubes. Imagine a heart pacemaker printed directly onto the surface of the heart, sensors that measure the stress on a recently broken bone, or temporary monitoring circuits that dissolve when they are no longer needed!

Technologies such as Smart Flesh highlight developments in the growing field of Tissue Engineering. It has long been assumed by Science Fiction authors and readers that laboratory manufacture of living organs would eventually replace organ transplantation as a means of repairing damaged humans (see Larry Niven's A Gift From Earth). One possibility raised in both the scientific and SF communities was that of cloning organs all the way up to whole bodies from just a few cells and samples of DNA. We now know that cloning is possible, but largely relies on stem cells—cells that are in a protean, undifferentiated state capable of developing into all of the specific cell types in a body, and thus are capable of differentiating and potentially developing into any type of cell—such as the recent report of a kidney grown entirely from stem cells. Tissue engineering seeks to shortcut the necessity to grow cloned tissues and organs by directly manufacturing them.

One of the first successes in the field was by Dr. Anthony Atala in 2006. Atala, first at Harvard University, then at Wake Forest University in North Carolina, dripped a nutrient solution with cartilage and stem cells over a balloon-like template to create a hollow structure made of cells similar to the human bladder. In 2007, the first of these lab-grown organs was implanted in a human patient. More recently, a breakthrough treatment for severe burns involves spraying the damaged skin with stem cells using a skin gun. The stem cells form a protective layer, reduce infection and form new skin without the scarring and complications of skin grafts. It will not be long until tissue engineering will adopt the techniques of 3-D printing to print a new organ instead of waiting for it to grow!

The implications are tremendous: a combination of custom-manufactured organs and the means to print electronic circuits on them. Aside from the obvious conspiracy theories and threats that such circuits will be used to control the patients, the concepts of combining tissue engineering and smart flesh are intriguing: imagine a heart transplant that can monitor its own health and report to a doctor any signs of rejection. Imagine still, that the heart can use its own circuits and tissues to prevent rejection! Can we print new Islet cells for a malfunctioning pancreas and cure diabetes? Perhaps we can... Indeed we probably will, as the future unfolds, until the day when we can manufacture a prosthetic for the brain, print it on smart flesh, place it on the brain, and dissolve the backing, leaving only the circuits... and cure traumatic brain injury, stroke and Alzheimer's disease.

The possibilities are perhaps frightening, but they are in greater measure very exciting. Tissue engineering and the use of advanced life-like materials such as smart flesh are making science fiction into science fact... and it's happening even as we speak.

Dr. Tedd Roberts, known to many science fiction fans as "Speaker to Lab Animals," is a research scientist in neuroscience. For the past thirty years, his research has concentrated on how the brain encodes information about the outside world, how that information is represented by electrical and chemical activity of brain cells, and the transformation of that information into movement and behavior. He blogs about his work here.