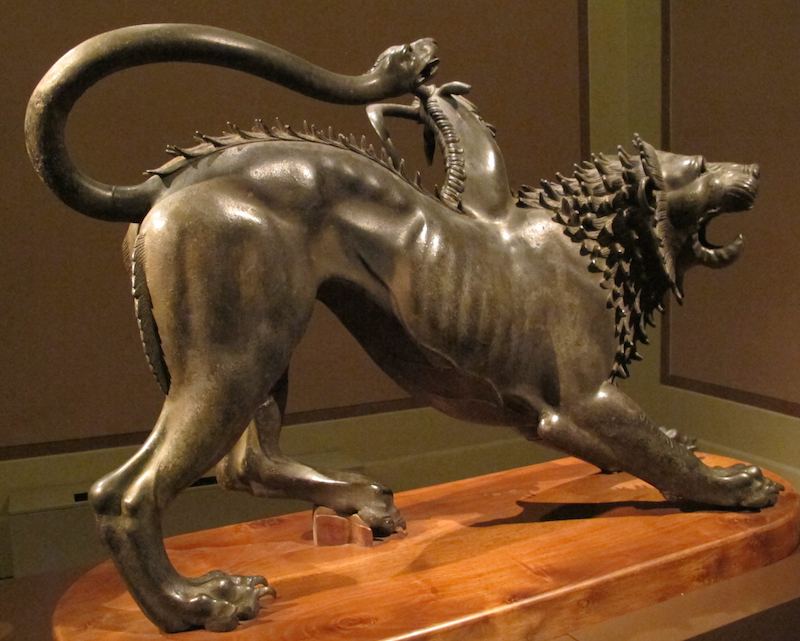 Chimera of Arezzo. Photo by Sailko via Wikimedia Commons

Greek mythology provided us with a host of terrifying monsters. Many of those were the issue of Echidna, who was a frightening beast herself: half beautiful maiden, half fearsome snake. According to Hesiod’s Theogony, this “mother of monsters” gave birth to several memorable creations: a three-headed dog (Cerberus), a half-woman, half winged lion (the Sphinx), and a many-headed serpent (the Hydra).

Hesiod also credits Echidna with giving birth to another frightening beast. In The Iliad, Homer describes it as “a thing of immortal make, not human, lion-fronted and snake behind, a goat in the middle, and snorting out the breath of the terrible flame of bright fire." There’s something inherently fearsome about this unnatural animal mashup, which Homer called the Chimera. Merely sighting her was a bad omen that heralded storms, shipwrecks, and natural disasters.

The word chimera has since been applied to anything composed of disparate parts, things that were not meant to go together. In modern times, we use chimera to describe an organism that’s composed of cells from two or more distinct individuals. Usually, this is the result of a laboratory experiment, i.e. mixing cells from one species with another. Researchers have been doing this for decades, albeit with limited success.

However, a few types of natural genetic chimeras already exist, and bear mentioning here. First, genetic chimerism is prevalent in certain animal species. Marmosets, for example, typically give birth to fraternal twins, and recent research has shown that many are twin chimeras. This is also a frequent occurrence when cattle have twins.

Human chimeras are less common, but can arise a few different ways. Women who carry a child can have cells containing fetal DNA in various parts of their bodies, effectively making them chimeric individuals. Bone marrow transplants, which are sometimes necessary in leukemia patients, effectively create a human chimera. Perhaps the best-known form of human chimeras arises during a twin pregnancy, when two zygotes fuse together (during early development) and are born as one person.

This quirk of biology has also been explored in science fiction. The CSI: Crime Scene Investigation episode “Bloodlines” involves a rape suspect whose saliva DNA didn’t match the sample he left during the crime, owing to the fact that he was a twin chimera. The science fiction television series Orphan Black focuses on Sarah Manning, who discovers that she has several living genetic clones. In season 3 (spoiler warning; skip to the next paragraph if you haven’t watched it) we learn that the source of DNA for both male and female clones was Kendall Malone, a chimera of male/female twins.

Most cases of natural human chimerism probably go unnoticed unless they cause medical problems (i.e. multiple blood types). However, chimeras can be problematic to DNA testing, which is increasingly utilized for medical, legal, or forensic reasons. In 2002, a woman named Lydia Fairchild was denied public assistance by the state of Washington because a DNA test showed that she was unrelated to her children. She was not only denied benefits, but also charged with illegal surrogacy and welfare fraud. Fortunately, a study came out in the New England Journal of Medicine that same year that documented a case of a woman who had a different blood type from her three sons due to genetic chimerism. Fairchild’s lawyers demanded more testing, and eventually proved that she, too, was a human chimera.

Chimeras in the Laboratory

The most interesting types of genetic chimeras might be the ones we can create in a laboratory setting. This type of research has drawn considerable attention following the January 2017 report by the Salk Institute for Biological Studies (La Jolla, California), in which scientists described a method for engrafting human pluripotent stem cells into pigs and cattle.

The method takes advantage of some sophisticated new molecular biology tools that have been developed over the past decade. To engraft part of animal A into an embryo for animal B, you generally need pluripotent stem cells (PSCs) from animal A. PSCs are undifferentiated, meaning that they haven’t yet matured into a specific type of cell. Thus, they can divide continuously, and their descendants can differentiate (specialize) into all of the different types required to make an entire organism.

Until recently, the only way to obtain stem cells from humans was from fertilized eggs, i.e. human embryos. As you can imagine, research using human embryos comes with a number of ethical and legal challenges. In the last several years, however, researchers have developed methods to “reprogram” differentiated cells, such as skin cells, into pluripotent form. These induced pluripotent stem cells have the limitless potential required for chimera formation.

Another breakthrough technology utilized in this study is CRISPR/Cas9, which I’ve already written about (see The Near Future of Human Genome Engineering). Essentially, CRISPR/Cas9 makes it possible to make specific changes to the DNA of living cells. Often, it’s used to “knock out” (disable) a specific gene in an experimental organism, to examine the effects on that organism.

This technology also provides a means to grow a specific organ in one organism using the stem cells from another. Basically, you use CRISPR/Cas9 to disable, in animal A, a gene that’s required to form a specific organ. Then you create a chimera of animal A and animal B. If that specific organ grows, it theoretically should comprise only cells from animal B. This is important because regenerative medicine—growing new organs from a patient’s own cells—is one of the most promising applications of genetic chimerism. 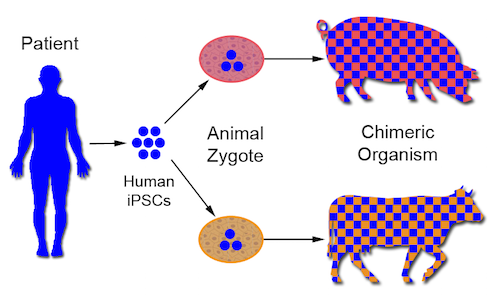 The Salk Institute researchers found that human cells made a relatively small contribution of cells in the living animal. Even so, their study demonstrated that chimeras of humans and pigs/cows are indeed possible.

Reaction to the Chimera Study

As you might expect, the Salk Institute study caused considerable excitement among researchers and the community at large. Human-animal chimeras have a number of compelling uses in research and medicine. They can be used to study processes of development, for example, or to create experimental models for hard-to-study human diseases. They might one day even provide a means to grow new organs from a patient’s own cells, which would dramatically improve the outcomes of organ transplantation.

However, chimera research involving humans, also brings ethical, legal, and social issues into intense focus. Not everyone is comfortable with the idea of human-animal chimeras. There are few laws that govern their use, particularly for privately funded research. It’s not hard to imagine how such a technology could be exploited for nefarious purposes. That’s true of many new molecular technologies, such as assisted reproduction, cloning, and genetic engineering.

What Does Our Genetic Future Hold?

The technothriller Next (2006) by Michael Crichton was the last novel published in his lifetime. It explores a near future dominated by massive privatized genetic research and corporate greed. In it, Henry Kendall—a researcher at a biotech company—is startled to realize that he has a part-human, part-chimpanzee son illegally created at a research facility where he worked. Meanwhile, another character, animal behavior researcher Gail Bond, raises a parrot whose human transgenes give it near-human speech abilities. In the world of Next, genetic technologies have run riot, with little supervision or restriction. It fits the theme of many Crichton novels, doesn’t it? Humans use newfangled technologies to tamper with things they don’t fully understand. We all know how that went in Jurassic Park.

As a scientist, I’m equal parts wary about the misuse of new genetic technologies, and thrilled about their potential to improve human lives. It is possible that we’ll end up like the Tleilaxu in Frank Herbert’s Dune novels—exploiting reproductive and genetic technologies for profit alone. Yet I prefer to think that we’ll be more like House Atreides: using our newfound powers in responsible ways, to make the world a better place.


Dan Koboldt is a genetics researcher with more than 60 publications in Nature, Science, The New England Journal of Medicine, and other journals. He works at an NIH-funded genome sequencing center, where he and his colleagues use next-generation DNA sequencing technologies to uncover the genetic basis of inherited diseases such as age-related macular degeneration, heart disease, cancer, and diabetes. Dan also writes science fiction and fantasy. His novel The Rogue Retrieval, about a Vegas magician who infiltrates a pristine medieval world, and its sequel The Island Deception, are out from Harper Voyager. His web site can be found here.