Welcome to Baen Ebooks, purveyors of DRM-free ebooks. This means you can enjoy your ebooks on as many eReaders as you choose for no additional cost.

Browse this month's new releases below: eARC, Ebook, Grantville Gazette. (Want to know what an eARC is? click here to find out.)

As of December 16th, 2012, Baen ebooks are now available for sale at other vendors as well as at this site. At the same time, prices for our individual ebooks were raised to meet the rest of the market. Titles available in print as hardcovers only will be $9.99, trade paperbacks $8.99, and mass market paperbacks $6.99. As part of the adjustment, we have also raised ebook royalties to authors by 25%.


Available exclusively at Baen.com are eARCs and serialized monthly bundles at our previous prices. There is a significant change from our previous practice in the availability of the bundles: once the books for a given month are printed and the books made available individually at other sellers, these bundles will not be available for orders. 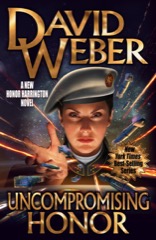 The Solarian League—for hundreds of years they have borne the banner of human civilization. But the bureaucratic Mandarins who rule today's League are corrupt and looking for scapegoats. They've decided the upstart Star Kingdom of Manticore must be annihilated.

Honor Harrington has worn the Star Kingdom's uniform for half a century. Very few know war the way Honor Harrington does. So far, hers has been a voice of caution. But now the Mandarins have committed atrocities such as the galaxy has not known in a thousand years. They have finally killed too many of the people Honor Harrington loves.

Now Honor Harrington is coming for the Solarian League. And Hell is riding in her wake. 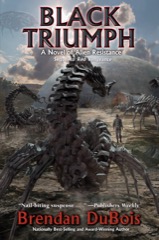 The conclusion to Brendan DuBois's Dark Victory alien-invasion trilogy. Bestselling and award-winning author Brendan DuBois proves that even in the most desperate of times, there are still men and women alive who will take up weapons to defend what is theirs.

More than ten years ago, the alien Creepers arrived in Earth’s orbit and started a war that was a slaughter for humanity. Nuclear weapons detonated in the atmosphere destroyed all electronic devices, asteroids dropped into oceans and lakes swamped cities with artificial tsunamis, and the nearly invulnerable Creepers arrived on Earth, going forth from their dome bases to attack civilians and military units at will.

Sixteen-year-old Randy Knox, a newly minted lieutenant in the U.S. Army, has been fighting the Creepers since he was twelve. He has seen friends, family members and fellow soldiers killed by the Creepers, and he is tired of war. At one point, it seemed the war was over when the aliens’ orbital battle station had been destroyed.

But a second Creeper orbital battle station has arrived.

The war no longer seems to be over, and while returning to his home unit, Randy’s convoy is ambushed. Separated from his fellow soldiers and his K-9 companion Thor, Randy faces the ultimate horror of every American serviceman: to become a prisoner of war of the aliens. 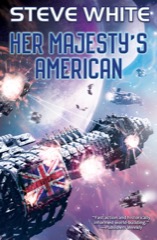 In an alternate future where the British empire never crumbled, the space ships of Her Majesty’s Navy work to keep the spaceways safe. Commander Robert Rogers of the Royal Space Navy is a defense intelligence officer known for his unconventional ways. Rogers is American born‑and‑raised, a loyal citizen of the Viceroyalty of North America. He’s a descendant of the founder of the highly effective, pro‑British Rogers’ Rangers during the Colonial unpleasantries of 1776, and he’s inherited his ancestor’s intelligence and drive in spades.

But there are those among the stars who are not so happy being subjects of the British Empire. In the Tau Ceti system, a cauldron of trouble brews as a terrorist faction of the rebellious Sons of Arnold attacks the empire from within, and warships of the theocratic Caliphate enters the system, prepared to do their worse to destroy the hated empire head on. Yet standing against the coming anarchy and tyranny is one intrepid spy prepared to risk all for queen and empire: 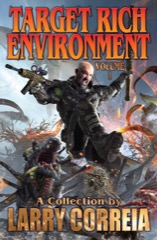 Together for the first time, fourteen action-packed tales of demons, monster, vampires, and cosmic horrors too terrible to name—and the men and women who take them all down. Oh, and toss in an interdimensional insurance salesman for good measure.

You’ll also find: An elven princess from the pages of Monster Hunter International on a mission to redeem her people. A samurai pirate with a blood vendetta against an extremely large sea beast. And a magic-wielding P.I. who walks the mean streets of Detroit.

Journey back to the origins of Monster Hunter International in “Bubba Shackleford’s Professional Monster Hunters.” Uncover the origin of one of Dead Six’s central characters in “Sweothi City.” And celebrate the holidays with the Grimnoir Chronicle’s own Jake Sullivan in “Detroit Christmas.”

Discover why it always pays to hire the very best when it comes to fighting a war when Correia takes on David Drake’s genre-defining Hammer’s Slammers series. And find out just how much damage a vampire can do when he was a Green Beret before he became one of the undead as Correia tackles Jonathan Maberry’s V Wars universe.

Includes three stories never before in print! “Murder on the Orient Elite” and “The Adventures of Tom Strange, Interdimensional Insurance Salesman” have previously only been available in audio format (narrated by Adam Baldwin of Firefly fame). And “Blood on the Water” makes its first appearance. 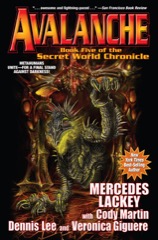 Ultima Thule has been destroyed—but somehow the Thulians mounted an even bigger force to destroy Metis. The Metisians that escaped the carnage and destruction of their secret city now must somehow find somewhere safe to go—without getting snapped up by various world governments. And now the Thulians have changed their tactics to “blitz guerilla warfare,” sending wave after wave of their ships and troops to attack vulnerable targets all over Earth, with no clue for ECHO as to where these things are coming from.

John Murdock and The Seraphym have become a force of nature, but they can’t be everywhere at once, and if they were regarded with suspicion before, now they are regarded by ECHO’s allies with fear as well.

You could say “things can’t get worse.”

You would be wrong.

Red Djinni’s past is about to catch up with him. 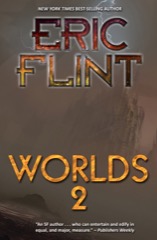 WELCOME TO THE MANY WORLDS OF BEST-SELLING AUTHOR ERIC FLINT

In addition to the fiction, Eric Flint has written an overall introduction, plus an introduction for each story, telling how it came to be written, making this an irresistible book for the many thousands of Eric Flint fans. 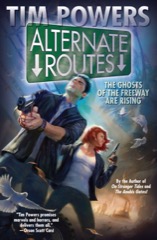 Something weird is happening to the Los Angeles freeways—phantom cars, lanes from nowhere, and sometimes unmarked offramps that give glimpses of a desolate desert highway—and Sebastian Vickery, disgraced ex-Secret Service agent, is a driver for a covert supernatural-evasion car service. But another government agency is using and perhaps causing the freeway anomalies, and their chief is determined to have Vickery killed because of something he learned years ago at a halted Presidential motorcade.

Reluctantly aided by Ingrid Castine, a member of that agency, and a homeless Mexican boy, and a woman who makes her living costumed as Supergirl on the sidewalk in front of the Chinese Theater, Vickery learns what legendary hell it is that the desert highway leads to—and when Castine deliberately drives into it to save him from capture, he must enter it himself to get her out.

Alternate Routes is a fast-paced supernatural adventure story that sweeps from the sun-blinded streets and labyrinthine freeways of Los Angeles to a horrifying other world out of Greek mythology, and Vickery and Castine must learn to abandon old loyalties and learn loyalty to each other in order to survive as the world goes mad around them. 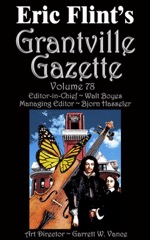 Grantville Gazette 78 opens with "Goodbye" by Thomas K. Scot, about a journeyman setting out on his working travels.

"The Observer" by Bjorn Hasseler explains how the first down-time profiler got started.

Michael Lockwood's "The Freeman's Oath" is set in one of the North American colonies that passed to the control of France. Can a freeman swear allegiance?

"Cremonensis Faciebat 1632, or Body and Scroll: The Luthier's Tale" by Tim Sayeau is about a violin maker who hears about Grantville and has to check it out.

In this issue's "Notes from The Buffer Zone: Conventions in the Sky," Kristine Kathryn Rusch remembers writers who have passed on.

A new column debuts: "Hot Off Eric Flint's Ring of Fire Press!" Here are the latest 1632 and non-1632 titles coming out.

In the Universe Annex, Mike Watson brings us "The Enigma of Charlie Peabody." Who is this man?