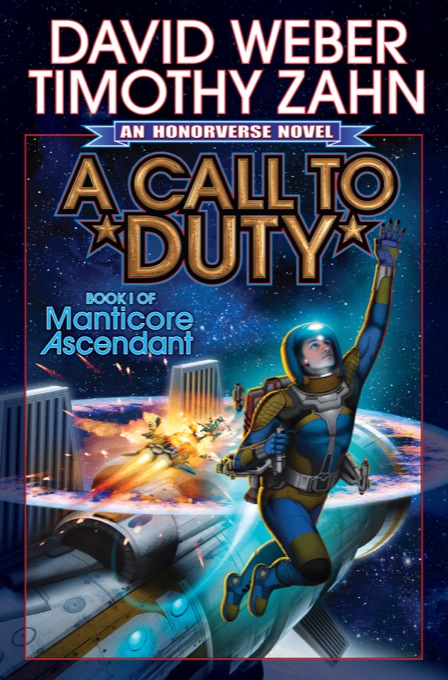 Growing up, Travis Uriah Long yearned for order and discipline in his life . . . the two things his neglectful mother couldn’t or wouldn’t provide. So when Travis enlisted in the Royal Manticoran Navy, he thought he’d finally found the structure he’d always wanted so desperately.

But life in the RMN isn’t exactly what he expected. Boot camp is rough and frustrating; his first ship assignment lax and disorderly; and with the Star Kingdom of Manticore still recovering from a devastating plague, the Navy is possibly on the edge of extinction.

“A new series set in the universe of Weber’s popular heroine Honor Harrington gets off to a solid start. Travis Long’s life is aimless until he opts to join Manticore’s dying Navy. Soon he and his half-brother Gavin, a low-level lord, are drawn into crucial military and political affairs. Cowriters Zahn (known for his Star Wars sequels) and Weber do an excellent job alluding to events known to longtime fans without putting off new readers. The dual paths of Travis and Gavin weave together nicely, and their participation in high-stakes affairs doesn’t feel forced. Though this astronautical adventure is filled with technical details and military protocol, the minutiae never outweigh the intrigue and political drama.” (Oct.)

With over seven million copies of his books in print and twenty-eight titles on the New York Times best seller list, David Weber is the science fiction publishing phenomenon of the new millennium. In the hugely popular Honor Harrington series, the spirit of C.S. Forester’s Horatio Hornblower and Patrick O’Brian’s Master and Commander lives on—into the galactic future. Books in the Honor Harrington series have appeared on seventeen best seller lists, including those of The Wall Street Journal, The New York Times, and USA Today. David Weber makes his home in South Carolina with his wife and children.

Timothy Zahn is a Hugo award winner, and author of the #1 New York Times best seller Heir to the Empire. Born in Chicago, Zahn earned a B.S. in physics from Michigan State University and an M.S. in physics from the University of Illinois. He sold his first story to Analog magazine in 1978, and immediately attracted attention as a new writer of science fiction based on real, cutting-edge science. Other Zahn creations include the Conqueror and Dragonback series. His books for Baen include his popular Cobra SF adventure series and the Manticore Ascendant series, cowritten with David Weber.

“To Canaan’s fair and happy land, where my possessions lie.”

“What was that?” Colonel Vachali asked from beside him. “Are you singing?” Wolfe Guzarwan turned from his contemplation of the cityscape outside the car to frown at his subordinate. The old song had been running through his head ever since he and the others left their converted courier boat Fenris and headed down to the surface of the planet Canaan. Apparently, sometime in the half hour since they set off toward the palace in their rental car some of the melody or words in that song loop had leaked out into the open. “No, I’m not singing,” he lied.

“Well, you were muttering something,” Vachali said.

“I wasn’t muttering, either,” Guzarwan insisted.

“He’s right, you were,” Shora offered from the driver’s seat. “I heard it, too.”

“Me too,” Dhotrumi seconded brightly from beside Shora. “Like you always do when you think out loud.”

“I do not think out loud,” Guzarwan growled. This was starting to get out of hand, and it was high time he reminded them who exactly was boss here. “And you’re all—”

“Sure you do, Chief,” Dhotrumi said. “Just half an hour ago, on our way down from the ship—”

“And you’re all invited to shut up,” Guzarwan said, raising his voice to the level where even Dhotrumi would take the hint.

Praise for the Honor Harrington series 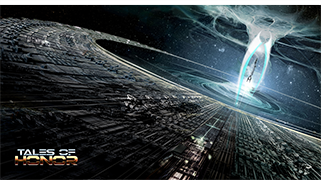 Find out about the upcoming film! 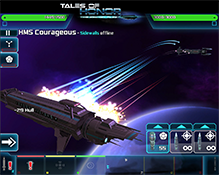