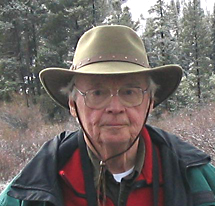 TW: How did you get started writing? Any specific influences?

FS: I began writing seriously around 1960, when I decided I could do as well as at least some of the people who were being published.

TW: What are some of the best perks of being a science fiction writer?

FS: The best perks of my job include very rarely having to set an alarm clock.

TW: Do you have any favorites among your characters?

FS: No special favorite among my characters. I don't even have to like them, as long as they do their jobs.

TW: What was the first sf story you ever read?

FS: The first sf I ever read was a tale whose title and author I've lost in the mist of time. But it appeared in some pulp magazine of the mid '30s, had to do with the landing on Earth of some malignant spores from outer space and scared the daylights out of my 7 or 8 year old self. On seeing its effect on me, my parents got rid of that magazine in a hurry. No more of that stuff in our house.

TW: Who are some of your favorite non-sf authors?

FS: There are a lot of good ones. Too many books.

TW: Are you a morning writer, an evening writer or a catch-as-catch-can writer?

FS: Pretty much a morning writer.

TW: Who would you like to see play your series hero (if app.) in a movie?

FS: Taking Harry Silvers ofRogue Berserker[available January 2005] as my series hero, I'd really love to see Bogart play him. Who knows? In the coming era of computer re-animation, it could happen someday.

TW: What invention or scientific leap in understanding would you most like to see made in your lifetime?

FS: Someone should figure out just how the genetic code got started. Its only analogies in the physical universe seem to be human language and computer code.

TW: If you could go back to one incident in all of history to watch as a spectator what would it be?

FS: I'd like to watch Shakespeare write a play -- and settle once and for all whose face the author of Hamlet wore. Another who needs a positive ID is Jack the Ripper -- but I'll leave that task to some horror writer.

For more information please go to (either address will get you to Fred Saberhagen's official site):
http://www.berserker.com
or http://www.fredsaberhagen.com.

For a fine fan site dealing with berserkers see: http://www.berserkerfan.org