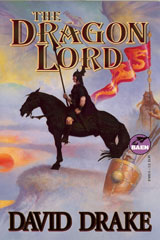 "I want a dragon," said the king. His voice was normal, almost too soft to be heard by the man across the table. "I want a thing that will fall out of the night onto a Saxon village, rip the houses apart . . . leave everything that was alive torn for the neighbors to find in a day or a week." The king’s voice began to rise. Centuries under Roman rule had smoothed the accents of most British tribes, but the burr was still to be heard among the Votadini. "I want a thing that can breathe on a field at harvest time, can turn its grain and beasts and the men among them to ash!

The other man waited with a half smile for the echoes to die. He was small and should have shaved off his beard. It was dirty, sparse, and ridiculous. He could have been merely a frail old man, except for eyes that bit what they stared at. "You have your army," he replied, using the willow switch he carried to dabble in the ale spilled on the intarsia tabletop. "Your Companions kill and burn well enough."

"Oh, I can beat the Saxons," said the king offhandedly, "but that won’t make my name live a thousand years." He was lying Roman fashion on the bench, his long cloak pinned at the shoulder and draped so that it completely covered his feet. He always hid his feet if possible, though all men knew that the right one was twisted inward from birth. The Saxons had named him Unfoot in derision when they first saw him leading a troop of cavalry against them. The name had stuck, but by now it had the ring of Hel or Loki in Saxon ears. "I can beat them a dozen times . . . but I’d have to, wizard, because they won’t surrender to me and there’s too many of them to kill them all. I can bring fifteen hundred men to the field at a time. If the Saxons stood in rows for a week, my Companions’ arms would be numb with throat-cutting. And there still would be Saxons in Britain."

The wizard looked down at the parquet table and muttered something under his breath. The spilled beer shimmered. For an instant the liquid showed two armies facing each other. The ripples were sword edges and silvered helms, teeth in shouting faces and the jewel-bright highlights of spurting blood.

The king pretended to see nothing. "I’ll give them a symbol, since they won’t surrender to a handful of horsemen. But I want it to be a symbol that kills and burns for a thousand years, kills unless I tell it to stop—or nothing remains. I want a dragon."

The willow whip nodded, throwing nervous shadows against walls where years had cracked away most of the frescoes. The paint had been replaced by patterned fabrics, tapestries, and brocades. The wizard said, "There have never been many who could raise dragons, Leader. The knowledge it takes, and even with the knowledge, the very considerable danger, yes . . ."

The king’s beard and hair were cut short—hacked short, rather, for he could not bear a blade in another’s hand to lie so close to his throat. Perhaps he would have let the hair grow and run across his torso in rich, syrupy waves had he not once seen a man try to dodge back from a dagger point—and find that his enemy gripped a handful of his beard. The king’s moustache alone was full. "Can you do it or can you not, wizard?" he demanded. "Can you raise me a dragon?"

The older man had heard that tone too often in the past to dally with his answer. "Yes," he said, "I can raise a dragon—and control it—if you can get me the ingredients I need and cannot supply myself." The wizard toyed with the beer and murmured again. A thing trembled on the inlay. Its neck was as long as its body, and its tail was as long as both together to balance it on its two legs. There were no forelegs. From the shoulders sprouted a pair of scaly black wings. The beast could have seemed childish, but it did not, even before one realized that the irregularities beneath the feet of the illusion were Saxon longhouses.

Nodding, reaching through the simulacrum for the ale pitcher to refill his jeweled bronze cup, the king said, "Of course, of course. What will you need?" His forehead glistened with sweat, but he still said nothing about the illusion.

"The major thing . . ." began the wizard. He paused to rephrase his thought and continued, "My magic works from lesser to greater; for a matter of this magnitude, however, ‘lesser’ by no means implies ‘little.’ There are monsters in the Pictish lochs. I need the skull of one of them."

The bronze cup gouged the tabletop as it slammed and splashed. His cloak swirling as he leaped erect, his eyes bright with sudden fury, the king shouted, "Am I God Almighty that you ask this thing of me? Or—" and his hand dropped to the hilt of the long dagger thrust through his brocaded belt—"do you think this is an easier thing than saying no to me? Wizard, if I believed that . . ."

Except for tiny lines around his eyes, the wizard’s face was unwrinkled. He kept it bland as a waxen death mask as he said, "Leader, I will not lie to you." He paused, holding the willow branch so still that not even the leaf eyes at the tip, bared when the wizard had stripped away the bark in long threads, trembled. "I need a skull."

The king let out his breath and with it much of his anger. "I can’t fight the Picts," he admitted. He stepped over to a side table set with napkins and a wide clay bowl for washing. The king’s limp and the thick-soled buskin that gave his right leg back its height were evident when he moved. "The Saxons fight like a big slow bear. My troopers can prick an army of Saxons and run off, prick it again and again until all the blood runs out and the army dies without striking a blow. But the Picts, now . . . the Picts swarm like bees. My horsemen don’t have enough hands to swat them."

He tossed a linen napkin to the dining table. The wizard mopped at the ale shining in pools on the parquetry, never taking his eyes off his king. The club-footed man continued, saying, "They dismounted me. A naked Pict rolled out of a clump of heather that couldn’t have hidden a toad, and he put a spear up into the belly of my horse. Then I was on the ground and I tried to stand . . . and they swarmed at me. . . ." The king slipped his foot out of its buskin and rubbed its calloused knob on his left calf as he remembered. "Cei got to me before they did, swung me over his saddle. That time. Oh, the Picts can be beaten—" his voice changed as he spoke and he was again the strategist and not the frightened cripple—"and one day I’ll do it, send an army of Saxons against them to trample their heather flat and spear them in their burrows. But not yet, wizard. I still have the Saxons to conquer. And there isn’t any way I can bring you a monster skull from the middle of the Picts."

The wizard pursed his lips. A thin line of bark still traced down the side of his switch. He began to worry it loose as he thought. "Can you get a man into Ireland?" he asked.

"They say the creatures once swam in Irish lakes. I don’t think they still do now, but all I need is the skull of one."

The king sat back down on the bench. His dark face lost a little of its hardness. "Yes," he said. "I couldn’t send one of my captains . . . any of my Britons, I think. Matters between us and Ireland are well enough—given what they were ten years ago, or a hundred. But there are men on that island still with long memories and long swords. Men who haven’t forgotten that raids on Britain stopped when I drowned them in Irish blood. Still, I’ve got a few Irishmen in my squadrons. If they sold themselves to me to fight Saxons, they ought to be glad of a job this easy. One of them will be able to bring you what you need." The king got up, calmly this time. He walked to the door of the entrance hall and threw it open. His six guards looked at him, scarred men whose eyes were as hard as the iron links of their mail. In its case in an alcove behind them, meant by its builder for his household gods, waited the war standard of the army. It was a tube of red silk, ten feet long from mouth to tapered end. When the wind filled it, the scales of gold writhed and whispered on the fabric. Uther, the king’s father, had borne it. It was the Pendragon, the King of War Standards, for which both Uther and his son were named. But its history was longer than that, longer than any man now living could recite. Four centuries before, the standard had come to Britain with a squadron of Roman cavalry. It had remained on the island, victorious and venerated, ever since.

From behind the king, the wizard asked curiously, "A mercenary? Do you think you’ll be able to trust a hireling with something as important to you as this is?"

The king’s eyes were fixed on the dragon banner. He was not seeing it as it was, but rather waving over greater triumphs than any it had yet known. The guards looked away uneasily, aware that their Leader’s expression was skewed a little to the side of madness. "Well, wizard," he said, "we’ll have to make him trustworthy, won’t we? Find one with a wife, say, or a son . . . or perhaps a comrade he loves more than life itself. I’ll have my dragon, Merlin. Depend on it."

Behind him the wizard nodded slowly. "Yes, my lord Arthur," he said. There was no doubt at all in his voice.