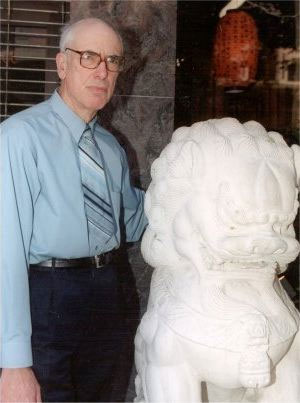 Barry N. Malzberg immediately attracted attention in the science fiction field in 1968 with the publication of his novelette “Final War.” One of science fiction’s most prolific writers, he has written over seventy-five novels in the field, as well as novels of suspense, crime fiction, and dark humor, both under his own name and under a number of pseudonyms. He has also written over a hundred short stories, in similarly varied fields. As an editor, he was in charge of Amazing Stories and Fantastic and other magazines, and has produced a number of anthologies. A winner of the Locus Award, he has been nominated several times for the Hugo and Nebula Awards. He is also a classical violinist, and has performed in such orchestras as the North Jersey Symphony Orchestra. He lives in Teaneck, NJ, with his wife. In April. Baen will be publishing Breakfast in the Ruins, a collection of his thoughts on the writing and SF.

“I was writing from the age of literacy, six or seven...reading and writing were to me synchronous acts.  I was writing ‘seriously’ however you define that from the age of 22, sold my first story (to a tenth-rate men's magazine) some months past my 26th birthday.  So, observed one way, I was writing with some and greater intensity for more than two decades before I received anything from it other than bewildered responses early and late.  Influences? Everyone from Salinger and Nabokov and Mailer to Sheckley and Bester and Chandler and Walter Miller.  Greatest influence on my science fiction was probably the l95l-l954 Galaxy SF Magazine which struck me as enacting exactly what science fiction should be.” Barry’s first remembered SF is “probably Red Planet (Scribner, l950), by Heinlein.”

Barry’s non-sf literary influences number in the “hundreds.  From Richard Yates to Sinclair Lewis to Ellen Gilchrist (!) to the l960s Mailer and on and on.  And on.  I wallowed in Bellow's Humboldt's Gift (l978), it is splendid.  (Liked Seize The Day, A Silver Bowl and Looking For Mr. Green too.)  The greatest 20th century writer was Nabokov who towers over the rest the way Shakespeare does over playwrights.”

Barry is a “catch-as-catch-can writer, as you put it so fetchingly.  Not really much of a schedule in these Golden Years.  I write what I want as I want.  Forty years ago I was a morning writer--20 pages from 7 am to noon, that kind of thing--and thirty years ago an evening writer (the Lone Wolf novels were mostly produced in the evening).  All depends.  Whatever facilitates.  A man's legs should be long enough to reach the ground.”

Regarding his favorite characters, Barry refers us to Philip K. Dick: “As Phil Dick wrote in a poignant and unknown essay (“Notes Made Late At Night By A Science Fiction Writer,” which begins "Here I am almost forty years old and still trying to write this), all my characters are my children, all are part of me.  Even the ones I loathe I love.  Stipulating that, the nameless narrator of Underlay (Avon l974) is he who is closest to me.  The character I'd most like to meet is his wife but she bails out on him at page l65 and is never seen again.”

“I'd like to see Mark Ruffalo play me in a film based on the biography of Alice B. Sheldon by Julie Phillips.  (I was one of the major Tiptree correspondents.)  Otherwise?  I wanted George Scott to have played Herovit but both of them are dead.”

For Barry’s shot at an innovation he’d like to see in his lifetime, he volunteers: “A liberal Democrat elected President.  (The Easter Bunny or Rabbit has a better chance.)” For a trip back in time, he’d go to 11/22/63, “If I am out of the line of fire.  The assassination (Don De Lillo's ‘bolt of lightning across the century’) has obsessed me for all these decades.”

Breakfast in the Ruins contains most of Barry’s criticism of sf. I asked him what other critics had influenced him. “Damon Knight, James Blish, the Budrys of the Galaxy columns l965-l97l.  Irreplaceable, at least the first two.  Donald A. Wollheim in conversation taught me half of what I knew or know.” Asked about the future of sf, Barry is, not unexpectedly, pessimistic. “I think that category/genre sf is in terminal trouble, the book develops that argument with some ferocity.  I hope I am wrong.  I want to be wrong.  Surely I will be dead before the genre perishes, however, so calm must prevail.”

Barry writes mystery as well as sf, and I asked him which genre he liked best. “I prefer good science fiction to good mysteries but I prefer middling mysteries to middling sf...and anything, even paranormal romance novels are better than bad sf.  (No names, please.)  Similarly I'd rather write good sf than good mysteries but The Lone Wolf novels are middling suspense and I wrote them with great passion and relative pleasure.”

For more information, check out Breakfast in the Ruins, published in April 2007 by Baen Books.