A Call to Insurrection - eARC 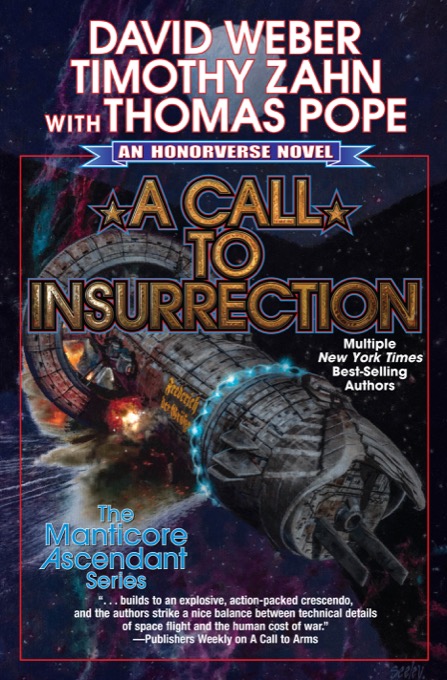 Yesterday, the Star Kingdom of Manticore was a small, unimportant interstellar backwater. A quiet little star nation, only recently recovered from the devastating blow of the Plague Years. More affluent than some, perhaps, but with little to attract trade or interstellar commerce, it had little need for a navy . . . and even less interest in paying for one.

But Manticore has now become a target. The Star Kingdom isn't certain who is attacking it, or why, or what its mysterious foe can possibly want, but Queen Elizabeth I knows she has to find out. And she knows that whatever some of her subjects think, Manticore does need a navy. And it needs allies, friends like the dynamic Republic of Haven and the Andermani Empire. It needs their trade . . . and to learn from their more experienced and powerful navies.

It is the job of officers like Travis Long and his wife, Lisa, to acquire that experience. Of utterly inexperienced diplomats like Travis's brother Gavin, Earl Winterfall, to build those alliances.

They have been sent to the powerful Andermani Empire to do just that, for the Imperial Navy is one of the most potent and experienced fleets in the galaxy. But the Andermani have problems of their own. Their Emperor's death is the trigger for insurrection, and now that powerful and experienced navy is locked in civil war.

The Manticoran visitors find themselves squarely in the path of the storm, and before Travis, Lisa, and Gavin can accomplish anything else, they first have to survive.